I bought these boots as I wanted something good quality, but not extortionate and waterproof. The have excelled. I’ve had cheap and expensive boots in the past but these have held up incredibly well.

Not only have they been totally waterproof with normal riding (not immersed) but they have also been very warm as well. They have Velcro fitting on the side but with no backup zip. I was concerned initially that once the Velcro became naff they would be useless, I was wrong. The Velcro is heavy duty had has not degraded at all, it’s also placed on the outer side of the boot which means less side wear against the engine.

They’ve managed winter very well and still only feel just warn in, and they’re six months old with daily use! 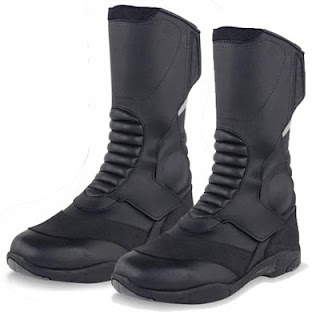 In the downloads section of the site you will find a fitting video for the fitting of the Scottoiler V-System chain oiler. We supply the entire scottoiler range of products.
Posted by JayceeDistributorsLtd at 04:11 No comments:

JayceeDistributorsLtd
Ipswich, Suffolk, United Kingdom
We are a motorcycle parts distributor based in Ipswich. We cover the whole of the UK